I knew that the train station waiting-room had been out of use for many decades. I pushed the door anyway and, to my surprise, it opened easily and so I entered the dusty and musty environment. My intention was to stay overnight at the station between the last train at 11.45pm, that late evening, and the next train at 5.45am the following early morning. I was armed with an old-fashioned 120 roll-film camera which only had 10 frames to play with. I managed to get 8 pictures to ‘come out’. Not too bad.

There were cobwebs everywhere inside the room and it was damp and cold. Years of stoor had gathered on all of the counters and bench-surfaces. The delicate strands of the webs caressed my forehead, and the back of my neck, and clung to my face in an unsettling sort of way. I could smell stale tobacco and I also got a more subtle hint of perfume too.

The clock on the wall had stopped at five to midnight. There was a fireplace sunk into the wall that didn’t look like it had seen flames for a long time. I had bought some matches with me and they came in handy because I managed to get an abandoned paraffin lamp going, which was great as this allowed me to take authentic time-exposures in the low-light of the lamp. And that indeed was my purpose. I was here to photograph echoes from the past, or ghosts, as people often call them.

I lay on a grubby bench and wrapped myself up into my sleeping-bag. As the night passed I saw moving shadows and heard odd high-pitched voices that sounded like people having conversations from 100 years ago while they waited for their train. I could just about discern some of what they were saying but the dialect was like nothing I had ever heard before.

Around about 3am I got bored. I got out of my sleeping-bag, and went over to have a closer look at an ancient telephone that was bracketed to the wall. I wiped it with my handkerchief and, just out of morbid curiosity, I put the handset to my ear. I heard a dialling tone. Now that really freaked me. I could accept that moving shadows and distant voices could be a figment of my imagination, but dialing tones? Was this environment playing tricks on my mind?

I put the phone handset back in its cradle. It immediately began to ring in a bell-like way. This could have been some sort of quirk, a stored electric pulse in the ancient wiring or something, I thought. But, when this ringing happened it took me aback, and I decided it was probably a good idea to get out of this spooky room as fast as I could. This was maybe getting just a bit too creepy for my liking.

I moved quickly to the big solid exit-door, tried the handle, only to discover it now appeared to be locked. Also, I could hear a man’s voice outside on the platform; a deeper voice, not high-pitched like the others. But who was wandering around at that time? I blew out the flame of the lamp and then I kept very still.

In the pitch black, from inside the waiting-room, I could see a shadowy figure, on the platform, walking past the windows. And then I heard a rattle of the door knob. I tensed up in fear of who might be about to enter, but the rattle was more of a “simply checking that the door was secure” because the footsteps then moved away along the platform and into the distance. Panic over. But was the exit door really locked or had the latch just slipped I asked myself. I tried the door knob again … 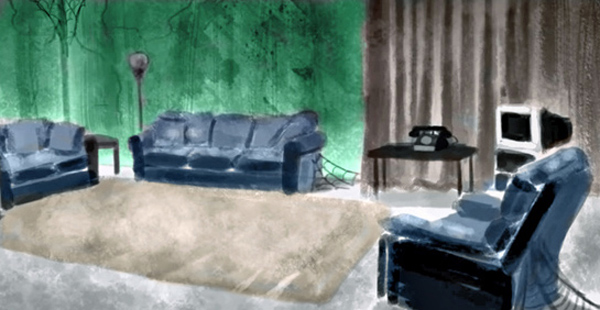