‘A splendid old house, isn’t it?’ the estate-agent declared persuasively. ‘Just the thing for a large family - with good taste. Not one of those modern boxes with no room to swing a … eh, do have any pets Sir?’

Deep in his heart Danny Adams agreed that the house was magnificent, but he also knew not to let his feelings show; not if a good deal was to be made. And so Danny tried to look mean and shrewd. But his was not a poker-face and it registered his emotions like he was an actor in the old black and white silent movies. He yearned for this big house with its cornices, attics, endless nooks and crannies, and above all, the thirty-by-forty foot living-room that “featured” a nineteen-foot ceiling and a fireplace big enough for a bonfire of cut-down wood.

And there were also ten acres of sweeping land too, offering wonderful privacy. What a great place for the kids! With five of them, all active, outgoing, creative, and impulsive - just like their Dad - finding a suitable house was no simple matter. Yes, but this one, almost hidden by the towering, leafy-oaks was a prize indeed - a lucky strike.

‘It’s not bad,’ Danny said cautiously, totally unaware that his soft, brown eyes shone like beacons. ‘But, after all, Mr Ross, the place has been locked up for over thirty years, and what with all the stories and stuff, that would scare most buyers off. Everybody isn’t as free from superstition as I am, you know.’

‘There’s nothing to all that talk,’ the Estate-agent assured him. ‘The owner just didn’t care to rent or sell. He inherited the property at a fairly young age, but never actually lived there - most probably because it was just too big for one person living alone. That seems reasonable enough. One man in a thirty-room house! Of course,’ he added quickly, seeing that a question was trembling on Danny’s lips, ‘it does need some work doing, but that’s why the ad said it “needs some attention”. We thought a handy-man would see it as a real bargain, whereas if we had to call in our regular contractors…’

Danny was, indeed, a remarkably good DIY man, having a knack for cabinet work, masonry, electrical wiring, and even plumbing. He looked forward, with pleasant anticipation, to the job of renovating the house. The family could stay in the old one, several hundred miles away, while he worked away in peace, making the house ready for them. And there was no need to even consult Angela; she knew his taste was impeccable.

I will not continue with the story-detail as it is just too disturbing to put into writing. However, I will summarise what happens rather than leave you hanging.

It is revealed that the story is set in November 1966. The Estate-agent and Danny agree on terms. There follows a period of intense activity and the old house is put into order.

Then there is the interesting puzzle of the mirror. The enormous mirror is set into the wall above the fireplace. The huge fireplace is intricately carved and decorated.

The family move in and are enthusiastic about the house. The five children enjoy exploring its many fascinating storerooms, attics, cupboards, and crawl-spaces. They range in age from five to thirteen. They walk, run, jump, and climb until they know every inch of the house.

Although the mirror was very old, it gave a clear, undistorted reflection. And with his family grouped around a blazing fire, Danny talked, with verve and imagination, about the reflected looking-glass world to be seen - in part - over the mantel-piece. The oldest boy, Jerry, more science-minded at thirteen, showed less interest until his father, with shrewd premeditation, raised the question: why are left and right interchanged in the reflection, but not up and down?

This puzzle kept Jerry occupied for the rest of his father’s story. Judy, who was eight, had a complaint. ‘The looking-glass room is just like ours,’ she pouted.

‘Not really,’ Danny said. ‘See the picture on the wall? In our room, the man’s on the left; in there, he’s on the right. Besides,’ he added quickly, aware that the distinction didn’t impress her much - ‘we don’t know what’s in the rest of the reflected house, through the archway and in all the other rooms. They may be altogether different from this side of the mirror. And the ones who live there may stay out of this room which we can see. The story will be continued tomorrow,’ Danny says at nine-thirty. ‘Now it’s bedtime, except for Jerry; he gets his extra half-hour.’

‘Not tomorrow, dear,’ Angela reminded him. ‘We’re going to the partner’s meeting, remember, and we won’t be back until midnight’.

Neither Danny nor his wife had any misgivings when they left the following evening. Although the house was isolated to a degree, the heavy doors locked, as did the windows. Jerry was a strong and responsible kid and he would be left in charge.

The next evening, when the parents were away, the five kids became fascinated by the big mirror. They all pulled together and held up a bedroom dresser-mirror, which they had taken of its hinges, in front of the fire-mirror in order to see into reflected areas in the mirror-world out of normal view.

When Danny and Angela came back into the house at eleven-forty and saw the living-room, she began to scream …

Two days later Angela died. And Danny was indicted for murder. But he believed it was a mercy-killing. 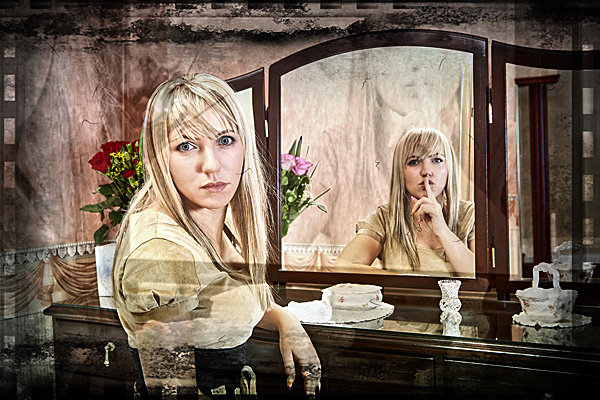