The year is 1972. The place is London. John feels like he is disappearing.

He walks, head down, out of the Housing Department building, and descends the big stone grey steps, into a busy street of bustling traffic. Cars, trucks, and red buses are jam-packed together. They thunder past him.

John is around 5ft 8 in height. He’s wearing a light-blue shirt, with a dark blue, plain tie, a dark jacket, and a lighter-grey over-coat, which is unbuttoned and blowing about in the wind. He looks at his best. But downtrodden. He’s 46 and still has all his own hair, albeit it’s a bit flat and dullish-looking, and it has quite a bit of grey running through the mousy brown.

John shows a stern expression, perhaps he even looks a bit indignant, as he walks along the pavement. Motorbikes, Commer vans, and black taxis, whiz by him. He doesn’t notice them. They don’t notice him. He walks along the crowded street, trying to avoid bumping into other people. He mutters away to himself. Now and then he waves his hands about to emphasise the points he’s making to his inner self.

Somewhere else in London, there is the sound of a police siren. A Rover P6 swerves to a halt outside a council house. The flash white car is unmarked, but it does have extra spotlights on the front grill, and blue-flashers attached to its roof.

At the end of this grubby, and mostly deserted, street there’s a big factory, bellowing out thick smoke from its huge chimneys.

A tall man, with thick-black, straight-hair, briskly exits from the passenger side of the vehicle. He slams the door shut, leaving his driver still sitting behind the wheel. The tall man is wearing a light-grey plain coat, a white shirt, and dark tie, and he has purpose on his mind. In the distance, a couple of young teenagers clock the car and the man in the grey coat.

Meanwhile, while this is going on, John is sitting, on a bench-seat, inside a London Underground carriage. The coach rattles away, swaying his body from side to side. John is a bit tense. Every now and then he leans forward, and then sits back again. He seems to be experiencing some sort of inner turmoil.

The tall CID detective is now standing in John’s living-room, talking to John’s wife. He towers over her. A frumpy little lady, in a dark-blue, plain dress, has just picked up an old black and white, square, glossy photograph from her dresser. She walks over to the grey-coated detective with the picture. The CID man stands there, with his notebook and pencil, and a serious look on his face.

“That’s funny” she says, in a shrill, and slightly confused voice. “I was sure he was in this one.” The photo shows a plain-looking lady, standing in front of an unsightly wire-mesh fence, which lies beneath two council-house iron window-frames. She wears a dark head-scarf and a dark coat. Her handbag dangles from her hands at the bottom of the picture. But the lady is not centrally-framed, she stands to the right-hand side of the photo. To the left, there is a gap, and just the non-descript background.

“Perhaps he took the picture” the detective says, showing a bit of impatience.

“Ted, my brother Ted, took it. John never owned a camera.” She goes on, in her shrill voice. “Perhaps you know Ted? He runs a very successful business up Dawes Road” she flicks her head to indicate the direction of where she is talking about.

“What would your husband be doing with a gun?” the detective asks. He speaks to the lady, slowly and deliberately, as if he is making allowances for her not being that bright.

“I’ve no idea” she replies, with doubt on her face. “He wouldn’t know which way to point it.”

The detective persists, “Why should he threaten someone at the Ministry of Housing?” he says, rolling his eyes a bit.

“He wouldn’t; not John. But, our Ted, he was a crack-shot in the Army.” she answers.

“Can you describe your husband?” he says, now looking bored.

“John?” she gazes into the mid-distance, as if trying to picture him.

“Well, I mean … he’s not exactly Rock Hudson.” she trails off as she can’t think of anything else to say.

“Has he got any distinguishing features?” he’s losing patience.

She struggles. “No … nothing. You’d hardly notice him really. Nobody ever does.

John is sitting on the bench-seat, in the dimly-lit underground train-carriage, his body swaying with the motion of the train. He sees his own perturbed face reflecting back at him from the window on the opposite side of the aisle. Then his own face begins to change into that of his wife. She has an expression of disproval on her.

In a nagging tone his wife’s reflection says to John “People don’t notice nobodies, you know, you’ve got to impress yourself on them.” she says, sternly.

John suddenly snaps out of the dream he was in, and becomes aware of the train, and the others in the carriage. He slowly glances around. In front of him, to his right, sits a smart-looking man of about thirty-five who has slicked-back black hair. The man in wearing a dark suit, a white shirt, and a tie with small checks on it. The man’s head is nodding with the motion of the train.

To his front-right there is a woman of about twenty-five who has long, straight, brown hair. She’s wearing a thick white polo-neck jumper and she has a medium-blue wool coat on. There is a “No Smoking” sign just above her head. Right next to her is a bearded man in his mid-fifties who’s got a dark casual jacket on. John is wondering if these people are more significant than he is; more striking or important than him perhaps. “Are they making a bigger impression?” he asks himself.

He quickly takes a look at a younger man, standing, near the carriage door, to his right. This man seems to have self-confidence, he’s got curly hair, which is longish, but neat, and he’s wearing a thick polo-neck jumper under his dark coat. As John slowly turns his head away from the younger man he sees his own dour face reflected in the carriage window again, sitting there, with his dull over-coat on.

John decides to stand up in the train-carriage to avoid looking at his own, furrow-browed, reflection. Now, fully stretched, his hands are above his head as he hangs onto a strap at either side, and stands upright in the aisle, trying to keep his balance. He glances, again, at the young woman with long, light-brown, hair and the man with the beard.

He’s still uncomfortable, and so he walks forward out of the carriage and stands in-between carriages, next to the automatic door that swings open at a station. He looks down at a prim-looking women, with black hair, nearby, who has glasses on. She’s in her forties and is sitting in a twin-seat reading a newspaper. John bends right over in front of the lady. She doesn’t even look up. John looks uneasy. He was very close to her but she just kept on reading as if he wasn’t there. John goes to the other side of the aisle and peers over another lady’s shoulder and tries to read her newspaper. There is no reaction from her. 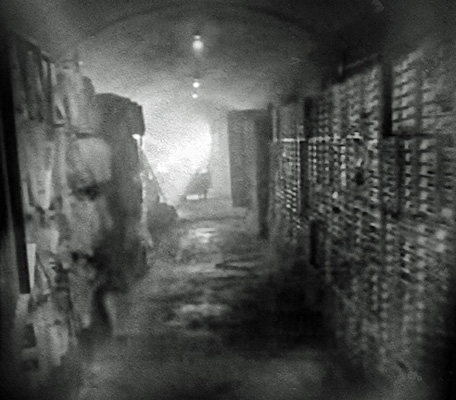